The NATO representatives claimed that deployment of the Russian Iskander-M missile complexes in the Kaliningrad region generated tension in the area. 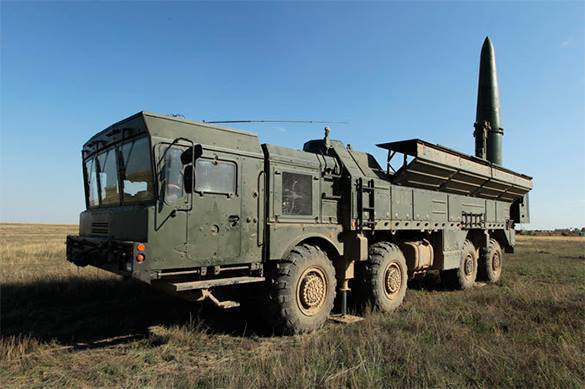 Official representative of the NATO explained in an interview with the German DPA that 'deployment of missiles equipped with nuclear warheads at the border with the NATO member-countries doesn't contribute to reduction of the escalation level'. He also highlighted importance of transparency growth and predictability of the military activity 'to evade incidents and risks of misapprehension'.

As Pravda.Ru reported, the Defence Ministry decided to deploy the Iskander-M complexes in the Kaliningrad region on 8 October.

Official representative of the Defence Ministry Igor Konashenkov said that units of missile troops along with the Iskander complex had been deployed in the Kaliningrad region several times and would be still deployed under combat training of the Armed Forces.

Beside that, the Russian military did not make a secret out of Iskander's transportation on the Akbal bulker. 'Moreover, one of the Iskanders was deliberately exposed before shipping to flying US intelligence satellite to specify operating conditions of the space equipment,' he added.

The Iskander-M was developed in 1990s, its range makes up 500km. It should be noted that theoretically it may carry nuclear warheads, nut now its just conventional weapon.

The NATO meanwhile had depolyed six bases at the north-western borders of Russia.

And the Pentagon ignited that it deprives the West of possibility to carry put a preventive strike against Russia for the sake of peace and democracy.