Black Sea fleet to annihilate adversary at its bases

The Black Sea of Russia may annihilate its potential adversary not even allowing it to leave the home station, Valeriy Gerasimov, Chief of the General Staff of the Armed Forces of Russia, claimed after strategic command drills Caucasus 2016 had finished in the South of Russia. 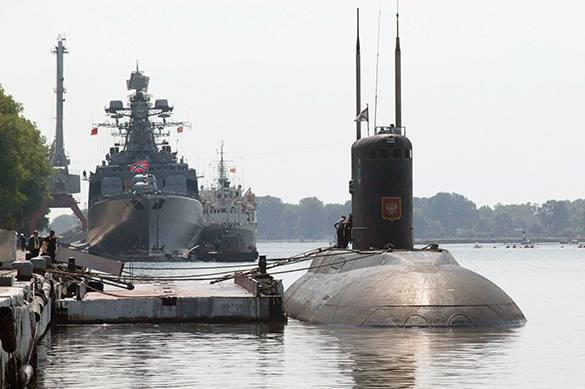 'The Black Sea has everything for it today: reconnaissance means which detect targets at the distance of 500km, weapons of destruction. The Bastion complex itself counts for a lot with the range of 350km, involving the Bosphorus. It's the Bastion, a ground-based complex. Beside that, there are submarines with the Kalibr missiles, naval aviation, strategic aviation with cruise missiles and so on,' Gerasimov said.

According to him, air landing troops of a potential adversary 'shouldn't reach the Black Sea coast of the Crimea, wherever they are deployed'.

'The Black sea should be capable and it showed that it's capable of defeating air landing troops with its means wherever they set off, starting with port of loading,' Chief of the General Staff stated.

As he said, today the Black Sea 'gives a good impression'. 'Some years ago combat abilities of the fleet contrasted drastically with the Turkish Navy in particular, when they were saying that Turkey was almost the only host in the Black Sea. Now everything is different,' Gerasimov noted.

He reminded that submarines with the Kalibr missiles arrived to the Black Sea fleet. 'Now there are three of them, one more is to arrive and two of them for the next year, so there will be six submarines. It's a brigade of diesel submarines, which correspond with all the modern demands,' Gerasimov said.

Beside that, the Black Sea fleet is equipped with small missile vessels, frigates with missile weapon, the General pointed out.

That is why the US considers Russia which dominates in the Black Sea more and more confidently, as well as China, which builds up artificial islands in the South China Sea, to be the main threat to their interests in the World Ocean.

As Pravda.Ru reported, the US has always been very interested in the Black Sea: deploying its military bases here, the Pentagon would be able to control all the Black Sea waters. That is why reunification of the Crimea with Russia was taken so hard by the US authorities. The Americans though were seriously getting ready to enter the Crimea. Military air fields and garrisons, which belonged to Ukraine, were regarded as their own military sites, and they even sent instructions on how to reequip them under the NATO standards. In the US military plans the April of 2014 was determined as time to start settling in the Crimea.