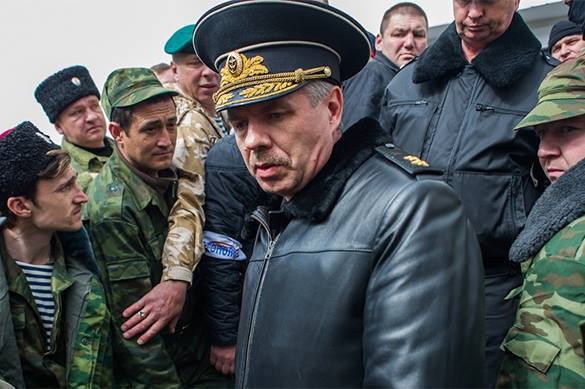 The Ukrainian main military Prosecutor sent Vitko on 22 April an accusation via certified letter of committing serious crimes against Ukraine.

As Vitko didn't appear, they decided to detain him. Aleksandr Vitko was put on wanted list on 26 April.

Spokesperson of the Black Sea Fleet claimed that Vitko had got no letters, or parcels and hadn't been aware of their existence.

Commander is accused of committing serious crimes since 20 February to 21 March 2014, aim of which was to alter Ukraine's state border. It is said that he orchestrated and took part in aggressive war against Ukraine.

The Russian Ministry of Defence called it a provocation. Vitko fulfilled his obligations given the agreement on Russian fleet basement in Crimea. Russia also initiated a criminal case against illegal acts of Ukraine.

Ukraine didn't take into account that Vitko is a citizen of Russia and is subject to Minister of Defence and Supreme Commander-in-Chief.

As Rostislav Ishchenko, President of the Center for Analysis and Forecasting, told Pravda.Ru, "if you want to sue military of a neighbouring state, you should win the war first, attain surrender."