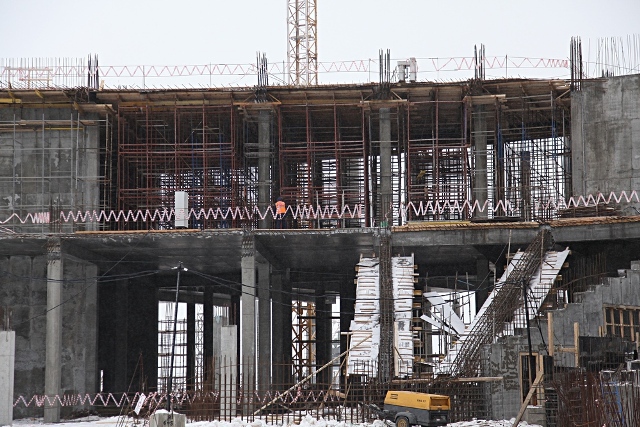 Nizhny Novgorod region Governor Valery Shanties paid a visit to the object and said that the stadium "is growing before our eyes."

"It was not that long ago, when we launched the construction of the stadium. Last spring there were earthworks here, then they began driving piles in summer, and today we can see that the stadium is growing, like a 3D-model. Builders are already working on the second floor. I am glad that Nizhny Novgorod companies operating on this construction have demonstration very good quality work. I was informed today that a company from St. Petersburg was replaced with a Nizhny Novgorod company," the head of the region said.

Deputy Governor Dmitry Svatkovsky stressed out that the Nizhny Novgorod program for the preparation for the FIFA World Cup FIFA 2018 in Russia included 60 other objects.

"The year 2016 will be a busy year for us in terms of construction works. The stadium is the main sports facility, of course, but other projects are just as important for us. It goes about the construction of hotels, "Strelka" metro station, a network of roads, the Borsky transportation system, a new terminal of Strigino Airport and so on. The works on all of these projects are going according to schedule," said Dmitry Svatkovsky.

Nizhny Novgorod will host six matches of the FIFA World Cup 2018 in Russia, including the 1/4 finals.

An independent survey conducted by FIFA in December 2014-January 2015, showed that 83 percent of local residents support the tournament in Nizhny Novgorod - it became the highest percentage of supporters of the World Cup in Russia among eleven other host cities.