Obama Killer No. 1 banner appears opposite US Embassy in Moscow

A large banner with a picture of US President Barack Obama has appeared opposite the building of the US Embassy in Moscow in the morning of January 27. The banner says: "Obama Killer №1." 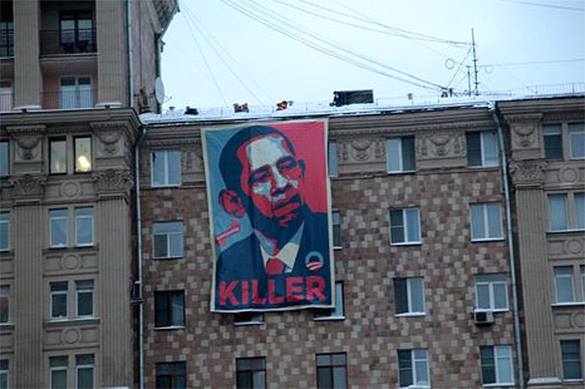 The banner was hung on apartment building on Novinsky Boulevard, 18. According to the Russian News Service, the action was conducted by "Glavplakat" art community. Moreover, a similar green laser inscription was projected on the building of the US Embassy at night.

Spokespeople for the US Embassy said that they were verifying the information.

Noteworthy, the Council on Foreign Relations, CFR,  a private US-based organization in the field of international relations, calculated how many bombs the United States dropped on other countries in 2015. The results were shocking. It was found that since 1 January 2015, the US had dropped 23,144 bombs on Iraq, Syria, Afghanistan, Pakistan, Yemen and Somalia.

Unfortunately, the bombing strategy does not work. Despite 947 bombs that the United States dropped in 2015 on the territory of Afghanistan, the Taliban still controls most of the territory of the country.

Meanwhile, the United States of America has been waging war in Afghanistan for 16 years, despite several promises from President Barack Obama to withdraw the troops from Afghanistan.

The air campaign that started on Aug. 7, 2014, was declared a "restricted" and  "humanitarian" intervention. However, former US Defense Secretary Leon Panetta said that it would be a war of 30 years.

The US side claims that due to the bombings and other efforts of the Pentagon,  more than 25,000 terrorists have been destroyed. According to US officials, only six civilians were killed in 17 months of the air campaign, although during the air strike on the hospital in Afghanistan's Kandahar in October, at least 30 civilians were killed.

To crown it all, officials acknowledge that the Islamic State still remains as strong as it was. In 2014, the CIA estimated the number of ISIL militants at 20-31 thousand people.