Body of Russian pilot killed by Turkey delivered to Russia

The body of the Russian pilot, Oleg Peshkov, who was killed in Syria in the downing of the Russian Su-24 bomber jet, was sent from Turkey to Russia on November 30, Ulke hater website said. 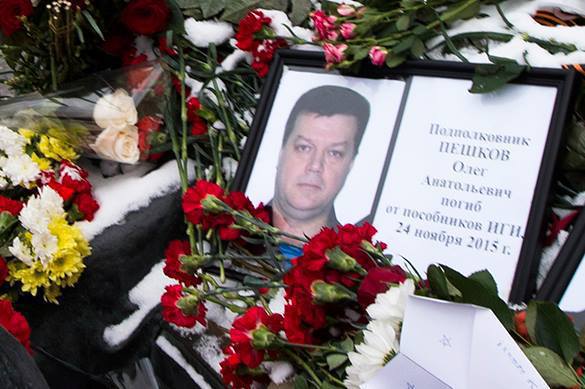 On November 24, an F-26 of the Turkish Air Force shot down a Russian Su-24 in Syrian airspace. One of the pilots was killed by automatic fire from the ground; the other one survived and was rescued. In addition, one Russian military man was killed in the shelling of a helicopter that was searching for the pilots of the downed Su-24.

The killed pilot of the Russian aircraft was awarded the title Hero of Russia posthumously in accordance with a decree signed by Russian President Vladimir Putin. In addition, captain Konstantin Murakhtin (the navigator of the downed Su-24) and marine Alexander Pozynich (a member of the search and rescue operation) were awarded the Order of Courage "for courage, bravery and selflessness shown during the performance of military duty."

In memory of Oleg Peshkov, a memorial board will be installed in his native Amur region. One of the streets of the man's native town is likely to be renamed in his honor.