Two people, including a police officer, have died and at least ten others have been injured when a bomb went off at a rally in Ukraine's second largest city of Kharkiv. 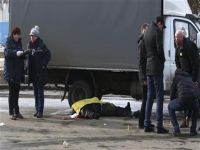 The rally took place to mark the first anniversary of the Kiev uprising which ousted democratically elected President Viktor Yanukovich in 2014. Four suspects have been detained by security forces.

The explosion occurred at 13.20 local time (11.20 GMT) at a gathering near the Palace of Sport in support of national unity.

Kharkiv is outside the conflict zone in Eastern Ukraine. The conflict began after the Putsch last year in Kiev, followed by massacres of civilians in Donetsk, Mariupol, Odessa and Slaviansk and the horrific massacre of Korsun, when Ukrainian Right Sector Fascists attacked, tortured and murdered citizens from Crimea travelling on buses after a rally in Kiev.

It is said that this is what really pushed the people of the Crimea away from Kiev.

On the front line, the terms of the Minsk Agreement are being implemented, with the Ukrainian Armed Forces (pro-Kiev) beginning their pull-back starting this Sunday while the Novorossiya Armed Forces will start pulling back from Tuesday, a process that shall be completed by March 8. On Saturday 191 prisoners were exchanged.