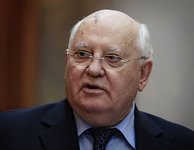 The first president of the USSR, Mikhail Gorbachev, said that he was disappointed with the policies of US President Barack Obama. According to Gorbachev, Obama will not be able to improve the relations between the USA and Russia.

"Obama is a lame duck. One should not finish their work in such an inept way. He decided to throw accusations around. Like, they met with our president and said hello. There won't be any good of that. I thought better of him," Gorbachev said on the air of the Russian News Service on Nov. 17, commenting on the results of the G20 summit in Australia.

In early November, Obama said he was not going to be a lame duck and announced his intentions to make his work as president fruitful. The head of the White House released such a statement after the recent US midterm elections, at which the Republicans, for the first time in eight years, took control of the Senate of the Congress, while retaining majority in the House of Representatives.

As for Russia, Obama has recently made a number of harsh statements. During the G20 summit, he called Russia's position on Ukraine a threat to the whole world. Before that, during his speech at the 69th session of the UN General Assembly, the US leader put Russia on a par with the Ebola virus and Islamic State terrorist organization.