Officials with the Volgograd Health Ministry said that the number of victims of the terrorist attacks on December 29 and 30 has grown from 33 to 34. The city is mourning the victims on January 1-3. 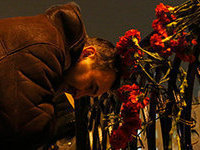 The blast at the railway station in Volgograd on Sunday, December 29, killed 18 people. Sixteen more residents were killed in the blast that ripped through a trolleybus on Monday morning, December 30.

Local residents brought hundreds of carnations and roses on the site of the second explosion. People continue to bring flowers and light candles in memory of those killed in the attacks.

Earlier, it was reported that about 420 residents of Volgograd organized militia groups to protect the city. Together with Interior Ministry troops, they are on duty in public places and public transport stops.

The volunteers inspect streets, transport, monitor the observance of public order, identify suspects, etc. Cossacks, representatives of municipalities from different districts of the region, employees of security companies also participate in the groups