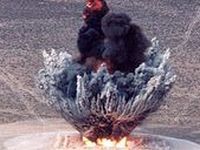 18 dead, around 50 injured six weeks before the Sochi Winter Olympic Games is due to open, is the result of the suicide bombing carried out at a railway station in the city of Volgograd, Southern Russia at 12.45 local time (08.45 GMT).

The perpetrator is believed to have been a female suicide bomber. Initial reports indicate at least 18 dead, 27 hospitalised and 23 people with lesser injuries. Eye witnesses speak of a blast near the metal detectors inside the Volgograd-1 railway station at 12.45 local time.

A suicide bomber murdered six people on a bus this October, also in Volgograd.