There are no political prisoners in Russia, PM Medvedev says 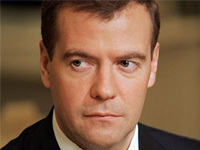 Russian Prime Minister Dmitry Medvedev believes that there are no political prisoners in Russia.

According to the Prime Minister, when discussing amnesty, one should not think of well-known persons. One should think about thousands of ordinary people in custody instead, he said.

Medvedev urged not to confuse amnesty with pardon that can be applied to specific individuals based on their petition. Amnesty applies to convicts under  on specific articles.

"One should not forget about 700,000 people in places of exile," said Medvedev, answering the question about the possible release of Mikhail Khodorkovsky or members of Pussy Riot band.

"Why do we always think of those who were lucky enough to get under the light of Jupiter? " he said. The Prime Minister reminded that there are many other people in prisons, including pregnant women and elderly individuals.

"Is their life easier that the life of those people you mentioned?" Medvedev wondered.

The head of government stressed out that the questions of amnesty and pardon were within the competence of the President and the Parliament.