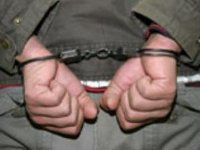 Three activists of Other Russia were sentenced to 15 days in jail for a protest at the Polish embassy in Moscow. Natives of Voronezh, Konstantin Makarov , Simon Verdiyan and Sergey Zaplavnov were convicted under article "Disorderly conduct."

According to investigators, the young men attempted to throw smoke and fire flares at building and unfolded a banner in front of the embassy with a slogan  "Russia from Warsaw to Port Arthur."

According to a spokesman for the movement, the action was "a symmetric response to the Polish side" in response to the attempted destruction of the Russian Embassy in Warsaw.