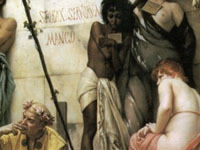 Russia took the 49th position in the ranking of world slavery. The list, which included 162 countries, was made by Australian organization Walk Free Foundation.

The first place on the list belongs to Mauritania. The situation with slavery is especially serious in Haiti, Pakistan, India, Nepal, Moldova, Benin, Cote D'Ivoire, the Gambia and Gabon.

The UK, Ireland and Iceland are least susceptible to slavery. These countries shared the 160th place.