Moscow gets hottest day of the year

According to the Meteorological Center of Russia, in Moscow, daytime temperatures climbed to 31.8 degrees Centigrade on Thursday, having thus set a new maximum in more than 100 years. 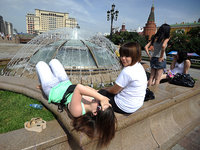 The unprecedented heat in the Russian capital has thus set a new temperature record for this summer. On Thursday afternoon, the temperature in the capital at first neared and then broke the previous record from 1911, when thermometers showed 31.4 degrees C. Thus, the day of June 27th, 2013, has become the hottest day this year.