Mikhail Prokhorov turns his back on Moscow mayor election

Civil Platform party  has left the election race for the position of the mayor of Moscow, but it will fight for the seats in the City Council of the Russian capital, Mikhail Prokhorov said. The billionaire and businessman urged all opposition groups to unite for the elections to the Moscow parliament. 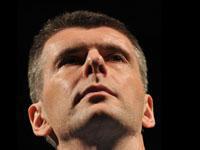 At the end of May, Moscow Mayor Sergei Sobyanin said that he was going to resign from the position of the Moscow mayor. President Vladimir Putin accepted the request.

Sobyanin will serve as the mayor before the election, in which he decided to take part as a self-nominated candidate. Right up to his decision not to participate in the election, Mikhail Prokhorov was considered one of the main opponents of the sitting mayor.