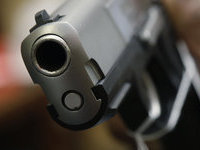 Temerkhanov was found guilty on two counts: "Murder by hatred or enmity against a particular social group" and "Illegal acquisition, transfer, sale, storage, transportation or carrying of weapons."

It was said that the discussion of legal consequences of the verdict will take place on Tuesday, April 30. Prosecutors strive for the punishment that they consider fair for the defendant. Temerkhanov's lawyer said that he would appeal against the conviction because his client was innocent.

Yuri Budanov was shot dead from a pistol in June 2011 in Moscow.

On January 10th, during a regular court session, witness Ruslan Fataliyev described the killer as an athletic man with blond hair. Temerkhanov has dark hair. Earlier in the preliminary investigation, Fataliyev said that he had only caught the sight of the killer and practically could not see his face - he only paid attention to his baseball cap.