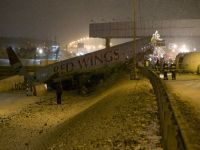 Red Wings Airline is ready to compensate its passengers for flight delays, due to the crash of the Tu-204 at Vnukovo airport.

"Red Wings Airline will provide passengers a compensation in the form of a free flight on any regular route (excluding charter flights) for flight delays due to the incident that occurred on Dec. 29, 2012," a message posted on the official website of the airline said.

According to officials representing the Russian airline, to receive a compensation, a passenger, whose flight was delayed on Dec. 29, 2012, should contact the call-center of the airline on January 10-31, 2013.

Due to the hard landing of the Red Wings airplane at Vnukovo Airport, several flights of the airline were delayed.

On December 29, a Tu-204 aircraft owned by Red Wings, skidded off a runway of Moscow's Vnukovo airport as a result of a hard landing. The aircraft fell apart and burst into flames. Five people were killed, three others remain in serious at medical institutions of Moscow.