The staff of the Russian State Trade and Economic University (known for the Russian initials as RGTEU) intends to address to the Investigative Committee to report a raid conducted against the university. 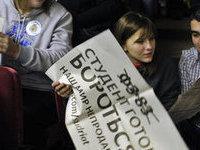 Meanwhile, the university continues to operate normally. The barricades of the tables and chairs erected at the entrance do not hinder the educational process.

RGTEU students, having learned about the resignation of their rector Sergei Baburin, began to build barricades not to let the newly appointed rector Andrei Shklyaev enter the building of the university.

The students spent the whole night in the university and announced the beginning of a timeless strike. Activists erect barricades of tables and chairs in the lobby of the building to block the entrance.

The news of rector Baburin's resignation became known on Tuesday. Deputy head of the Ministry of Education of the Russian Federation, Alexander Klimov, read out the order to appoint Andrei Shklyaev on the position of acting Rector of the troubled University.

The scandal around the status of the Russian State Trade and Economic University emerged after the results of monitoring conducted by the Ministry of Education, which declared the university ineffective. The students of the university protested against the possible reorganization of the university and went on strike last week.

Nevertheless, the decision to join RGTEU to Plekhanov's REU was made. Officials promised that all students, including those who went on strike, would be able to finish their studies under the same programs and for the same price that they paid on the off-budget department of RGTEU.