The Federation Council Committee on Constitutional Legislation recommended that the upper house of the parliament should adopt the "law of Dima Yakovlev". 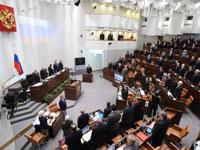 It became known yesterday that the Foreign Affairs Committee of the Federation Council also agreed to recommend the adoption of the law.

Russia's State Duma adopted the "law of Dima Yakovlev" in the final, third reading on December 21. The part of the law that prohibits adoptions of Russian children by U.S. citizens has generated an international scandal.

Dima was a two-year-old boy from Russia, who died in the United States after his adoptive father left him in the hot car for hours. The Russian list in response to the infamous acts approved in the USA may contain 22 foreign families who will be denied entry to Russia.

Also read: Americans to be banned from adopting Russian children