Russia's Chief Sanitary Doctor Gennady Onishchenko believes that the norm about the minimum acceptable content of alcohol in blood for drivers should not be retrieved in the Russian legislation, reports Interfax. 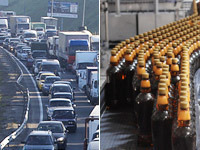 "If you like yogurt, then you have to choose: you either drive or you drink yoghurt. So there's a guy who likes yoghurt, and then they complain that we have restricted his rights. But he can kill our children and citizens - what is that?" Onishchenko said on Monday during the hearings at the Public Chamber of the Russian Federation. The session was devoted to toughening penalty measures for drunk driving.

It goes about not really a sweet yoghurt, but kefir - a fermented milk drink made with kefir grains. Traditional kefir is fermented at ambient temperatures, generally overnight. Fermentation of the lactose yields a sour, carbonated, slightly alcoholic beverage, with a consistency similar to thin yogurt. Kefir fermented by small-scale dairies early in the 20th century achieved alcohol levels between one and two percent, but kefir made commercially with modern methods of production has less than 1% alcohol, possibly due to reduced fermentation time.

Many Russians like drinking kefir - it is widely available in grocery stores across the nation.

The official stressed out that he was standing against the return of the norm of "three per thousand." According to him, this limit will only exacerbate the situation with drinking on the road.

"It is not the time to give a reason in our country, with the chaos that we have on the roads. A drunk man falls out of his car, and it turns out the next day that the content of alcohol in his blood was legally acceptable - this just can't be so," he added.

The Chief Medical Officer of the Russian Federation also defended the traffic police, who, in his opinion, get unfair criticism from drivers.

"Let's put an end to this humiliating boorish attitude to traffic police officers. They are citizens of our country, representatives of the state. All these fables and bullying about them: traffic police should be given decent salaries, they should have the desire to hold on to this job," said Onishchenko.