Special events to commemorate the victims of terrorist attacks will be held simultaneously in 12 places of the Russian capital on September 3rd. 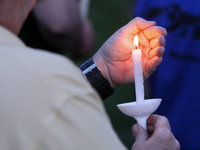 Muscovites will gather at the places where terrorist attacks took place over the years. The meetings in memory of the victims and ceremonies to lay flowers at the memorials will take place on the square in front of the music theater on Dubrovka metro station, near Park Kultury, Lubyanka, Avtozavodskaya, Rizhskaya metro stations, as well as in the underground pedestrian passage of Pushkinskaya subway station, on Guryanov Street and Kashirskoye Shosse, near National Hotel and at Domodedovo Airport, on Volokolamskoye Shosse and on the Tushino Airfield, Argumenty.ru wrote.

In addition, at the monument to the victims of Beslan hostage crisis (on Solyanka), a ceremony will be held to mark the 8th anniversary of the tragedy in Beslan. The Action of Remembrance, dedicated to the eighth anniversary of the Beslan hostage crisis, will be held today at the monument of "Children of Beslan" on Malookhtinsky Avenue in St. Petersburg. People will commemorate the victims of the tragedy with a moment of silence and prayers.

Memorial services and other activities will also be held in other cities of the country during the Day of Solidarity in the Struggle Against Terrorism, which is celebrated annually on September 3. This memorable date appeared in the calendar after the tragic events in Beslan in 2004, when terrorists killed more than 300 children and adults.