Belarus said it was halting the transit of Russian gas to Europe on Tuesday after Moscow stepped up gas cuts to Belarus in a debt spat, while President Alexander Lukashenko said the two countries faced a full-blown "gas war". 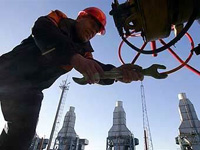 Russia doubled gas supply cuts to Belarus to 30 percent of normal volumes on Tuesday to force Minsk to pay debts for deliveries, which it estimates at $192 million. Belarus for its part says Gazprom owes it $260 million for gas transit although Gazprom says Minsk had effectively blocked payments, Reuters informs.

The frequent wrangling over gas supplies poses a threat to other European countries that are heavily dependent on Russian gas piped through Belarus.

A spokesman for Gazprom, Sergei Kupriyanov, said earlier on Monday that the gas transits to Europe will remain impervious to the current dispute and envisaged cuts, Press TV reports.