President Dmitry Medvedev Monday made the first ever official visit by a Russian leader to Singapore to promote stronger ties with the high-tech island as he seeks to modernize Russia's economy. 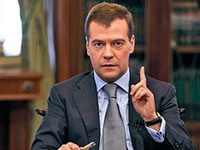 Russia -- which joined the Asia-Pacific Economic Cooperation (APEC) forum in 1998 -- has in recent years sought to bolster its relationship with states such as Singapore to diversify its trade base.

With Medvedev seeking to limit Russia's dangerously high dependence on oil exports and transform it into an innovative, high-tech economy, relations with Singapore have taken on a new importance.

Medvedev met late Sunday with Singapore President S.R. Nathan after the country hosted the APEC summit, telling him "that the system of economic and technical education in your country is of great interest for us."

The Russian leader said agreements were reached at the talks on long-term investment, financial projects and exchange of technologies.

Medvedev also met with post-colonial Singapore's founding father Lee Kuan Yew, who is credited with masterminding its rapid growth since independence and now holds the title of minister mentor in the cabinet of his son, Prime Minister Lee Hsien Loong.

On Monday he was due to meet with the Singaporean premier.

Moscow and Singapore forged ties in 1968 under the Soviet Union. Lee Kuan Yew, who was prime minister for almost three decades, twice visited the USSR and has been to post-Soviet Russia three times.

And despite the economic crisis which has hit Russian trade with other big Asian economies, trade rose 62.2 % in the first eight months of the year to 1.1 billion US dollars.