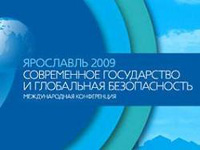 Keen to burnish his credentials as a political reformer after a year in office which saw little actual reform, President Dmitry Medvedev ordered officials to stage an international conference on "The Modern State and Global Security."

The idea was to show how Russia, like Davos, could be a forum for open debate among international experts on delicate subjects such as democracy, terrorism and the world order.

Communists present praised Josef Stalin for his sensitivity to social issues, Russian analysts blasted U.S.-style democracy, a Chinese speaker railed against the "evil" of separatism and an American suggested China's late leader Deng Xiaoping as a model for introducing democracy.

"With Dmitry Medevedev's arrival in power as Russia's president, discussion of democracy in our country moved onto a higher level," Igor Yurgens, who chairs a think-tank founded by Medvedev, told the conference.

Medvedev, who took power last year, has repeatedly stressed the need for Russia to open up and modernise its political system. But opponents say he has made very few real changes to the tightly controlled set-up he inherited from his mentor Vladimir Putin.

The few opposition figures present among the 500-odd guests said Russian democratic reform was still at the discussion stage. "I suppose it's better to have a conference on democracy than not to have one," said Georgy Bovt, one of the leaders of the small pro-business party Right Cause.

Inside the expensively fitted out stadium turned conference centre, speakers talked of democracy in the abstract. Foreign guests avoided direct references to Russia.

Medvedev himself did the same in his keynote speech. He spoke of how a nation's right to sovereignty should not be used as a pretext to create isolated, non-transparent, closed political regimes -- but did not go into details.

The prime ministers of France and Spain, Francois Fillon and Jose Luis Rodriguez Zapatero praised Medvedev fulsomely for holding the conference and stressed in their speeches a desire to cooperate more closely with Russia -- and do more business.

Considering the state of diplomatic ties, the Kremlin has shown a preference of late for deals with French and Italian energy companies, rather than British or U.S. majors, The New York Times reported.

The man whom opponents blame most for the erosion of democracy in Russia over the past decade, Prime Minister Putin, was absent from the Yaroslavl conference.