Dmitry Medvedev is backing new laws to regulate the sale of beer, alcopops, and vodka. 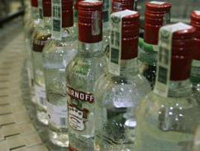 Russians are among the world's heaviest drinkers according to the Kremlin, which reports consumption of 18 litres (32 pints) of pure alcohol per capita per year, more than double the World Health Organisation's recommended maximum.

The new campaign appears to reflect the growing influence of the Russian Orthodox Church whose head, Patriarch Kirill, is playing a prominent role in public life.

Mr Medvedev has given the government three months to act. He wants shop assistants who sell alcohol to anyone under 18 more than once to face criminal sanctions, cans of alcopops and cocktail drinks to be restricted to 330ml, and new health warnings to cover at least a fifth of beer and other cans.

The hundreds of thousands of street kiosks that supply many Russians with their drink will be banned from selling strong beer, which is usually 9 per cent proof.

The russian president has also asked the government to consider a minimum price for vodka and a Soviet-style government monopoly on its production. Half-litre bottles currently start at just 100 roubles or £2, making it affordable for even the poorest.

Analysts are sceptical about the measures, as they say that the initiative is good and timely but there are great doubts if it  would be different from other initiatives that brought no results beyond allocating huge sums of money, according to Telegraph.co.uk.