High drug use among Russia's youth is a threat to national security, President Dmitry Medvedev said on Tuesday. 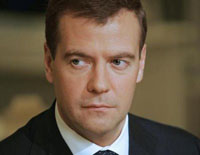 With Russia the world's top consumer of Afghan heroin, the head of its drug enforcement agency also called on U.S.-led forces in Afghanistan to do more to stem the flow of drugs.

Russia already faces a shrinking population because of poor diet, smoking and heavy drinking. Russian men have an average life expectancy of 59 years, far lower than in western Europe.

A declining population, coupled with serious health problems, would undermine Russia's economy by reducing the size of its workforce.

"Experts believe the real number of (drug) users ranges between 2 million and 2.5 million," Medvedev told a meeting of top officials who make up Russia's Security Council.

"Official data show that some 30,000 drug users, aged 28 on average, die in Russia each year. This compares to a total of around 15,000 dead in the far more populous Soviet Union lost during the whole of its Afghan war in 1979-89.

Alarmed by the drug trade and concerned about a spread of hardline Islamist militancy into the former Soviet Central Asian republics, Russia has taken some steps towards cooperating with the United States in the U.S.-led war in Afghanistan.

It has allowed the United States to move supplies through Russian territory and is looking at ways of increasing international cooperation to stem the heroin trade.

"This is why we believe that as long as we support this (U.S.-led) operation conducted there, we have the right to expect that these forces will fight to destroy these drugs." U.N. data show that Afghanistan's opium harvest totalled 6,900 tonnes, down from 7,700 tonnes in 2008. But this year's crop still accounts for some 90 per cent of the world's supply.

Medvedev said Russia was still lacking a nationwide anti-drug strategy and pressed for tougher punishment against those involved in drug-related crimes.

Testing students in all Russian educational institutions for drug addiction could be introduced, Medvedev said. Ivanov said Russia's anti-drug strategy would ready in the first half of next year, the Reuters reports.