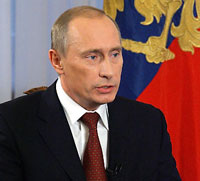 "Russia is showing and will show economic, political and if necessary military support to Abkhazia," Putin said in a news conference in Abkhazia on Wednesday, according to Russia news agencies.

Putin also discussed with Abkhazia PM Sergey Bagapsh the building of a legal basis for cooperation relation between the two countries.

Mr Putin said the Russia side has prepared nearly 40 cooperation agreements in many fields to sign with Abkhazia. He confirmed that despite the impact of the global economic downturn, Russia is continuing to assist Abkhazia.

At the end of their talks, the two PMs witnessed the signing of the intergovernmental agreement on Russian assistance to Abkhazia to boost socio-economic development.

According to plan, in 2010, Russia will spend about US$465 million on projects to establish a modern border-guard system and expand its bases in Abkhazia to guarantee the security of the two breakaway regions, VOVNews.vn reports.