Russia Welcomes EU, not US, Work in Georgia

Russian Foreign Minister Sergei Lavrov said on Wednesday, Moscow welcomes the work of EU monitors in Georgia, deployed in the Caucasus state a year ago after the Russian invasion, but is opposed to the United States having a role. 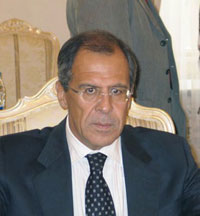 Russia Welcomes EU, not US, Work in Georgia

In a brief war last August, Russia crushed Georgia's attempt to retake its rebel province of South Ossetia. Moscow has recognised the independence of South Ossetia and another rebel region of Abkhazia, taking them under its security umbrella, Reuters reports.

Sergei Lavrov said the peace plan brokered by French President Nicolas Sarkozy "continues to be a most serious stabilising factor".

He accused Georgia of trying to "drag the Americans into Georgia" and put them up against the Russian military, BBC News reports.

Meanwhile, leader of Georgia's breakaway region of South Ossetia, Eduard Kokoity, announced the closure of the administrative border with Georgia from Tuesday midnight, forbidding any vehicles or passengers to cross over.

A statement published on the website of South Ossetia's news department said the closure was aimed at "guarding against further provocations from the Georgian side."

However, Russia's RIA Novosti news agency said the closure was due to the threat of the A/H1N1 flu, as 12 Georgians were reported to have been infected, Xinhua reports.