California to be wiped off Russia’s map

Deputies of Russia’s Nizhni Novgorod region intend to liquidate several settlements in the region, including the village of California. 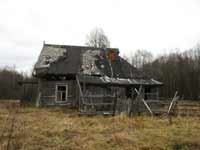 California to be wiped off Russia’s map

Vladimir Gryzhin, an official of the Sechenovsky district, where the village is situated, said that the village of California was a deserted settlement, which had absolutely no perspectives for development since there was not even a power line in California.

Another official of the district, Vladimir Osokin, advised Gryzhin should ask the US Senate for help to recreate California.

California’s last residents moved to the village of Lipovka in the beginning of the 1990s. Nevertheless, the village of California was left on the map and still has its zip code, Lenta.ru reports.

There are several variants to explain the existence of the settlement with such an unusual name in Russia. One of them says that a local landowner visited the USA in the second half of the 19th century and subsequently renamed one of his villages to California.