Russian stocks continued their nosedive Friday after the abrupt departure from the country of a foreign oil boss and the prime minister's unexpected severe criticism of a large steel firm. 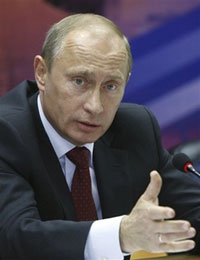 MICEX, the exchange where the bulk of trading in Russian stocks takes place, plunged 5 percent as of 3 p.m. Russian time, while the RTS, a leading index, lost 5 percent to sink beneath the 2000-point barrier for the first time since March.

Putin criticized the company, which is the largest supplier of coal for steelmakers in Russia, for charging much higher prices for raw materials domestically than it does for its exports. He called for an antitrust investigation into Mechel's activities.

Earlier Thursday Robert Dudley, CEO of the embattled Anglo-Russian oil producer TNK-BP, left the country three days before his visa was due to expire. Russia has not renewed the visa on the ground that he allegedly does not have a valid work contract.

Dudley, who said in a statement his departure follows a sustained assault on the company in the past several months, vowed to run the company from abroad.

The developments rattled investors, leading to a heavy sell-off in Russian equity, which is dominated by oil stocks.

"Sentiment is moving against Russia," said James Fenkner, managing partner at Red Star Asset Management in Moscow. "If oil has any kind of bounce, the market will look kindly on Russia. If oil (prices) begin to slip, there will be a great unwind."

Observers say soaring oil prices have largely masked the political tensions bubbling beneath the surface, and investors are tensely watching how the corporate conflict plays out at TNK-BP, widely seen as a test case for foreign investment under new President Dmitry Medvedev.

Medvedev, who campaigned on an anti-corruption ticket, has insisted the conflict is a matter between the shareholders. Many analysts are convinced, however, that the state wants to take a controlling stake in the company at a later date via a state-owned entity.

While the TNK-BP dispute has spooked investors, observers were skeptical that the onslaught on Mechel heralded a politically motivated attack of the type that brought Yukos oil company to its knees and caused lasting harm to Russia's investment image.

"I think the probability of this becoming a Yukos-style asset grab is relatively small," said Red Star's Fenkner. "But if it's an asset distribution, then all bets are off."

In a research note, Chris Weafer, chief strategist at UralSib, said, "The last train carrying the optimists out of Russian equities has just left the station. Let's hope it's just for a vacation rather than emigration."

The RTS is now down more than 20 percent from its mid-May high, pushing it into technical bear territory.