Russia opened a fourth plant Tuesday to destroy its chemical weapons stockpiles, which are the largest in the world. 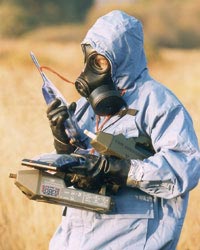 The destruction facility, located near the site of one of Russia's seven major chemical weapons arsenals, will help accelerate an ambitious effort to fully eliminate the stockpiles in less than four years.

The plant is about 350 miles (550 kilometers) southeast of Moscow.

"The start-up of a fourth destruction facility this month will now help Russia to accelerate their chemical weapons stockpile destruction and potentially meet the April 2012 deadline of the Chemical Weapons Convention for complete stockpile elimination," Global Green USA program director Paul Walker said in a statement.

"However, deadlines must not trump safety and protection of public health, and we urge Russia to be extremely cautious and transparent as they move forward with this dangerous process," Walker said.

The U.S. has declared the world's second-largest chemical weapons stockpiles of 31,500 tons and has completed destruction of about half of it.

Russia signed the Chemical Weapons Convention in 1997, the year it was created, pledging to eliminate its arsenal within 10 years. Both Russia and the U.S. have been granted a five-year extension to the original deadline.

Rogelio Pfirter, director-general of The Hague-based Organization for the Prohibition of Chemical Weapons (OPCW) who attended Tuesday's plant opening, praised Russia for working to fulfill its pledge and called for international assistance in the effort.