Shaklein’s fourth message states the main aspects of the region’s development. He underlined that the Kirov region is a constantly developing place. Industry in the region is almost as well developed as overall in Russia, and the speed of increase in investments into the economy of the region are almost double as high as in the rest of Russia. Salaries of the citizens have grown a lot. The unemployment level and poverty level has decreased. 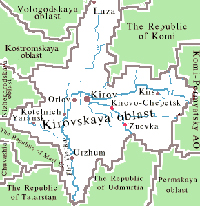 In 2007 the rate of non-ferrous metal industry, cellulose and paper production, constructional materials and furniture production increase was higher than overall in Russia. In 2007 the level of income has increased by 24, 5 percent, which double as high as the inflation level. The average wage level is 8905 rubles (about 378 dollars).

However, as the governor states, the region has many more ways to develop. While stating the main points of development, Shaklein said that it’s necessary to stick to the key principles stated by Vladimir Putin in “The strategy of Russia’s development until 2020” and by Dmitri Medvedev during the economical forum in Krasnoyarsk. They consist of 4 points: society, infrastructure, innovation and investments.

The governor paid special attention to the utilization of forest resources, technical and technological modernization of the industry, the way to attract investors and the scheme that would help to fight illegal forest clearance.

He also named the production of constructional materials a key aspect of the economy’s development. Last year the rate of increase in this industry was 1, 7 times higher than on the average in Russia. The region is rich in natural resources that can help to bring the industry up to a higher level.

The Governor also named rural areas development the strategic task for the Kirov parliament. Despite the fact that great sums of money gave recently been invested in the development of this project, agriculture remains the only branch where positive results haven’t been reached.

It is also essential to make comfortable conditions for the youth to return back to the rural areas. It is necessary to develop the program of cheap lodging construction. To improve the situation, a law concerning the agriculture development has been passed in November of 2007.

Among the key methods to develop the region are the gasification of the region and the development of power engineering.

The Governor reminded the words of Vladimir Putin about the way to develop the economy. Vladimir Putin stated that the transition to the innovative way of development is first of all connected with the investments to human capital assets. Shaklein added that the national foreground project is an effective tool of social sphere development. Economic growth made it possible to increase the amount of money spent on social protection, so that financial support to veterans, children and the youth could be increased.

Despite all the efforts made in the social industry, there are some spheres where severe improvement needs to be made. This refers to education and preschool training. This question is very acute for the authorities as during preschool and school education a good children need to receive good educational background so that they can become first-rate professionals and succeed in life.

In conclusion the Governor mentioned that with the help of hard work made by each citizen, the image of Kirov region has greatly improved. Mr. Shaklein thanked every citizen of the region and said that together all the difficulties can be overcome.