Russians go to the polls today to elect Russia's third president. Most of people are expected to vote for Putin's protege Dmitry Medvedev, which will allow Putin to retain power afterwards, when he probably takes the office of Russia's prime minister. 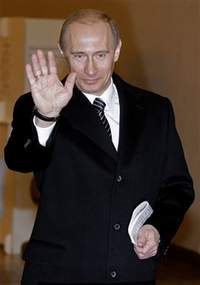 Dmitry Medvedev, a 42-year-old lawyer and loyal Kremlin aide, is expected to take over from Putin, whose eight years as president have left a deep imprint on the world's largest country.

"I'm in a good mood. Spring is here," Medvedev said as he cast his ballot in Moscow, where rain and wet snow sprinkled the streets. "The season has changed."

Putin, smiling and relaxed as he went to vote, said he was in a "holiday" spirit and that his wife, Lyudmila, called the rain "a good sign."

Some voters complained of pressure to cast ballots in Medvedev's favor, and critics called the election a cynical stageshow. Few international observers were on hand to monitor the voting.

Two election day bomb explosions targeting a police convoy near Chechnya served as a reminder of the tensions around the once-breakaway republic, one of the challenges the next president will face. Some 450,000 police and troops deployed nationwide to ensure the voting proceeded calmly.

If Medvedev wins, the world community will be watching closely to see how he and Putin share power. Some in the West have welcomed Medvedev's reputation as a moderate after years of tense ties with Putin over his crackdown on domestic dissent, U.S. plans for a missile defense and Kosovo's independence, among other things.

Analysts predict, though, that Medvedev could face opposition from Kremlin insiders hostile to the West.

Though he has never held elected office, Medvedev has had an easy ride toward the presidency. Polls predict he will take a solid majority of votes against the three other candidates: Communist Gennady Zyuganov, flamboyant ultranationalist Vladimir Zhirinovsky and the relatively unknown Andrei Bogdanov of the Democratic Party.

"Medvedev is a wonderful, young, handsome energetic man who will continue Putin's work and be a shining example to our children," said Tamara Razumova, a Medvedev voter who works in a polling station in Moscow.

He said that was slightly higher than during parliamentary elections in December. The final turnout during that vote - which handed overwhelming victory to the ruling United Russia party - was 63 percent.

In Chechnya, riven by two wars since 1994 but now more or less under control by a Kremlin-backed administration, President Ramzan Kadyrov predicted 95 percent to 100 percent turnout.

"I voted for a bright future, for Medvedev," he told The Associated Press in Grozny.

Moscow street cleaners swept away grime for voting day. In the southern Russian city of Stavropol, public transport was free for the day. In Krasnodar, a local group staged a lottery open only to voters - with a car as the top prize.

In Medvedev's native St. Petersburg, some voters quaffed bargain beer at their polling place. Others showed up for the goods, but didn't bother to vote.

Some cast protest ballots, including Alexander Petrov, a 28-year-old trader in the Pacific port city of Vladivostok who voted for Zyuganov because he wanted to "take away votes from the candidate of the ruling powers."

Government-paid teachers and doctors across the country complained that they were being pressured to vote at their workplace under the gaze of their superiors to ensure a convincing win and a high turnout for Medvedev. Golos, an election monitoring group, reported similar accounts.

Sofia, 25, a history teacher in a school in southwestern Moscow, said the principal required her and her colleagues to cast ballots at a polling station set up on the school premises.

"This is terrible; they are not leaving us any choice," said Sofia, who declined to give her last name out of fear of losing her job. She said she destroyed her ballot in protest.

The only liberal candidate, former Prime Minister Mikhail Kasyanov, and Garry Kasparov, the former world chess champion and one of the Kremlin's most prominent critics, were both squeezed off the ballot on technicalities.

Kasparov held his own protest against the election Sunday near Red Square. Escorted by a dozen riot police, he carried a plastic shopping bag that read, "I am not participating in this farce."

Only 300 international election observers were monitoring the 96,000 voting stations across Russia's 11 time zones. The influential Organization for Security and Cooperation in Europe refused to send observers, saying Russian authorities were imposing such tight restrictions that it could not work in a meaningful way.

Candidate Bogdanov, asked how much support he expected, said: "Any percent would be good."

Observers from the Parliamentary Assembly of the Council of Europe complained to the election commission about disproportionate campaign airtime given to Medvedev. PACE observer Nigel Evans said monitors were watching for intimidation at polling stations and for "helpers" offering voting assistance.

Timofei Ryumin, 38, a doctor who lives in Russia's westernmost region, the Baltic city of Kaliningrad, said Medvedev's campaign seems "planned and coherent" and voted for him despite disappointment in the Kremlin's unfulfilled promises to provide cheaper housing for families like his.

"I don't see alternative leaders who could hold a firm grip on power," he said. Noting widespread voter apathy, though, he said that for many, election day is "just another reason to get drunk."