Development to Culture: cheap lodging to the Russian youth

The campaign “We Are Addressing the President” started on February 4 in Kirovskiy region, Russia. It’s going to last until March 2 – the Election day. 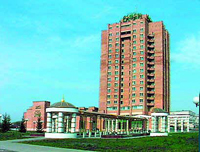 Development to Culture: cheap lodging to the Russian youth

During the press conference Michael Likhachev, one of the sponsors and the leader of Munisipal District of Kirovskiy Region Association,stated that more than a thousand offers and complaints have been gathered so far.

The majority of them is connected with the problems of lodging, road and communication problems, salary levels and agricultural development. A lot of people are also concerned about the problem of providing young Kirovskiy region families with lodging. Young people of Loban village, for instance, say they don’t mind living in their native town in case proper cheap lodging is provided.

Culture and sports topics were the most popular among people. Books of offers and complaints were usually put in local libraries, so almost each Book has the request to rebuild libraries and establish the new national project, “Culture”.

The topics of the request varied greatly, from the necessity to establish healthy way of life propaganda and fight drunkenness to the will of turning senior exams back to the traditional form. This request was made by the students of Sanchursk town. On of the authors of the request addressed the president in an original way: “Dear Mr. future President! I wish you luck and success in governing such a rich and powerful country as Russia!”

The campaign masters say the requests’ collection is similar to the survey, because it shows which problems in the region are the most urgent. Besides, it’s a good way to learn the pre-election atmosphere.

Judging by the way people addressed the president, the overall pre-election spirit is positive. While asking the future president to pay attention to certain affairs, people said they in return are ready to give the him all the necessary support. It’s not by chance that people say: every nation has the exact amount amount of power it deserves.

Organizing committee of “We Are Addressing the President” campaign