Russia to suspend its participation in CFE treaty

According to the law, singed by President Vladimir Putin, Russia is to suspend its participation in the Conventional Forces in Europe treaty. 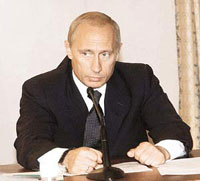 Russia to suspend its participation in CFE treaty

The suspension takes effect Dec. 12. Under the moratorium, Russia will halt inspections and verifications of its military sites by NATO countries and will no longer be obligated to limit the number of conventional weapons deployed west of the Urals.

The 1990 arms control treaty set limits on the deployment of heavy conventional weapons by NATO and Warsaw Pact countries, to ease tensions along the border between the old Eastern bloc and Western Europe. The treaty was revised in 1999 after the collapse of the Soviet Union .

Russia ratified the updated treaty in 2004, but the United States and other NATO members have refused to follow suit, saying Moscow first must fulfill obligations to withdraw forces from Georgia and from Moldova 's separatist region of Trans-Dniester.

Putin called for Russia's temporary withdrawal from the treaty amid mounting anger in the Kremlin over U.S. plans to build a missile defense system in eastern Europe.