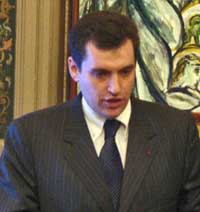 Russia will not abandon its plans to suspend implementation of a key European arms treaty even after of U.S. proposals for cooperation on missile defense, a leading Russian lawmaker said Friday according to ITAR-Tass news agency.

ITAR-Tass and other Russian news agencies quoted an unidentified Foreign Ministry official as making a sharper statement suggesting that the United States had gone back on its word - the latest salvo in a dispute that has deepened tension between both countries.

Russia has sharply opposed U.S. plans to deploy missile defense installations in Poland and the Czech Republic. The United States says the system would counter a potential Iranian threat, but Moscow says it believes the real aim is to weaken Russia's nuclear deterrent.

Earlier this year, President Vladimir Putin offered an alternative involving joint use of a Russian-operated radar station in Azerbaijan, but has cited the U.S. plans as a factor in his decision to suspend Moscow's participation in the Conventional Forces in Europe treaty, which limits regional military deployments.

U.S. President George W. Bush's administration welcomed Putin's offer but pushed ahead with its plans for Eastern Europe, while continuing talks with Russia on missile defense cooperation. Thursday's remarks were the first Russian response to formal proposals the United States submitted this week.

Slutsky said the proposals would not change Russia's plans to suspend participation in the CFE treaty on Dec. 12 - a move Moscow says is aimed at convincing the NATO nations to ratify an updated version of the pact that it says is less discriminatory toward Russia.

"We will not go back and forth on this moratorium," ITAR-Tass quoted him as saying.

The remarks could be aimed to stake out a tough position before expected discussions between Rice and Foreign Minister Sergey Lavrov on Monday in the United States.

A senior U.S. official, who requested anonymity because he was not authorized to speak for attribution, said earlier this week that the missile defense document included proposals made by Rice and Gates.

The offers include integrating U.S., Russian and NATO missile defense systems to expand protection of Russia and the West; allowing regular Russian inspections of the U.S. site in Poland; and delaying activation of U.S. missile interceptors until it is clear that Iran can reach Europe with ballistic missiles.