Two female sailors were shot by a U.S. Navy sailor early Monday on a U.S. military base in Bahrain. 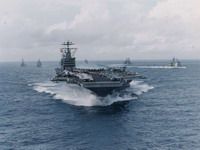 The alleged shooter, a male, was critically wounded in the incident in the barracks on the U.S. Naval Support Activity Bahrain base, said the Navy official, who spoke on condition of anonymity because the official was not authorized to release the information to the media.

The third sailor apparently shot himself during the incident, which was limited to the three sailors and was not terror related, the Navy reported in a statement.

The Navy said the three sailors seemed to be acquainted, "but the extent of their relationships and the details of the shootings are still under investigation."

A State Department official in Washington said that while initial reports suggested the incident may have been the result of a "love triangle," it now appeared to be a case of a jilted boyfriend shooting and killing his ex-girlfriend and then shooting himself. It is not clear if the second female victim was romantically involved, the official said, speaking on condition of anonymity because the investigation, being handled by the military, was still under way.

The shootings took place around 5 a.m. (0200GMT), the Navy reported. Officials closed the base temporarily and reopened it about an hour after the incident.

The two women were pronounced dead at the scene, and the man was taken to a local hospital in critical condition, the Navy said.

No other details were immediately available, and the Navy said it was not releasing the names of those involved until their families were notified.

"The incident is under investigation, and it would not be prudent to discuss details at this time," said Navy spokesman Lt. John Gay.

Bahrain, a tiny island nation on the Persian Gulf, is a U.S. ally and home to the U.S. Navy's 5th Fleet, which is responsible for an area of about 2.5 million square miles (6.5 million sq. kilometers) of water including the Persian Gulf, Arabian Sea, Red Sea, Gulf of Aden, Gulf of Oman and parts of the Indian Ocean.

About 3,600 personnel work on the U.S. Naval Support Activity Bahrain base, located just outside Bahrain's capital, Manama. The base supports U.S. naval ships in the region.