A sharp magnitude 5.6 earthquake shattered central New Zealand, but there were no immediate reports of injury or damage. 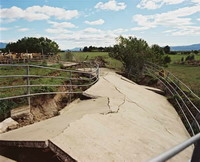 The quake hit at 8:15 a.m. Thursday (1915 GMT Wednesday) and was located in the north of South Island 150 kilometers (94 miles) from the southern city of Christchurch, geological sciences agency, GNS Science, reported on its web site.

It said the temblor, which occurred 70 kilometers (44 miles) below the Earth's surface, was "widely felt in South Island" and also lightly rocked the capital, Wellington and southern North Island.

New Zealand sits above an area of the Earth's crust where the Pacific and Australian tectonic plates are colliding and records more than 14,000 earthquakes a year - but only about 150 are felt by residents. Fewer than 10 a year do any damage.