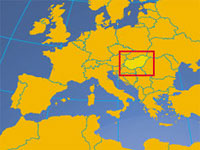 The bus collided with a trailer truck carrying passenger cars after the driver lost control and darted through a gated area. The bus finally stopped on the train tracks.

Marta Toronykoy, a police spokeswoman for the southern county of Csongrad, said the bus likely rolled onto tracks at an excessive speed but did not overturn.

The bus was carrying 32 Romanian tourist and two drivers.

"In the crash the truck driver and six tourists died immediately," Toronykoy said.

She said 13 people were injured, including three who were in serious or life-threatening condition. The injured were being treated in nearby hospitals in Szeged and Mako, close to the Romanian border in the southern part of Hungary.

Toronykoy said the truck driver was a Romanian national.