Plane skids off runway and plows into gas station in Brazil

A Brazilian airliner skidded off a slick runway, crossed a busy road and plowed into a gas station. All 176 people aboard were feared dead and an official said Wednesday that at least 15 others were killed on the ground. 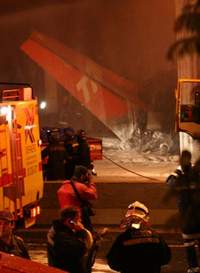 Plane skids off runway and plows into gas station in Brazil

If the deaths are confirmed in Tuesday's crash at Brazil's busiest airport it would be the worst air disaster in the nation's history. President Luiz Inacio Lula da Silva declared three days of national mourning.

Rescue workers, forensic experts and doctors were scouring the burnt wreckage of the TAM airlines Airbus-320 Wednesday, and the official toll of 40 dead was expected to rise sharply and efforts proceeded.

The airliner was en route to Sao Paolo from Porto Alegre in southern Brazil when it crashed and burst into flames as it landed in driving rain. It barreled across a highway during evening rush hour and ran into a gas station and a building owned by TAM.

Sao Paulo state Gov. Jose Serra said the hopes of finding any of the 176 people aboard alive "are practically nil," since the temperature inside the plane reached 1,000 degrees (1,830 Fahrenheit).

A Sao Paulo public safety media official who could not give his name because of department policy said 25 charred bodies had been recovered so far from the plane and 15 other bodies from the ground. Ten more people on ground were injured, he said.

Presidential spokesman Marcelo Baumbach said no cause would be immediately released because it was premature to do so.

The runway at Sao Paulo's Congonhas airport has been repeatedly criticized for being too short, and two planes slipped off it in rainy weather just a day earlier, though no one was injured in either incident.

In June, airport authorities used heavy machinery to cut grooves the length of Congonhas airport's runway to channel off water when it rains in a bid to make it safer in a city with frequent tropical deluges. The airport is also closely ringed by densely populated neigbhorhoods.

Eyewitness Elias Rodrigues Jesus, a TAM worker, told The Associated Press he was walking near the site when he saw the jet explode in between a gas station and a Tam building.

"All of a sudden I heard a loud explosion, and the ground beneath my feet shook," Jesus said. "I looked up and I saw a huge ball of fire, and then I smelled the stench of kerosene and sulfur."

Tam Linhas Aereas flight 3054 was en route to Sao Paulo with 170 passengers and six crew members, the company said in a statement.

Congressman Julio Redecker was among those on the flight, but an aide did not know whether he was dead or injured.

The airline released an list of most of the people on the flight early Wednesday morning, but did not specify their nationalities.

"Tam expresses its most profound condolences to the relatives and friends of the passengers who were on flight 3054," the company said.

Before the list was released, Lamir Buzzanelli said his 41-year-old son, Claudemir, an engineer, had called him from Porto Alegre to say he was in the plane and about to return from a business trip.

"My hopes are not too high because I've been calling him on his cell phone, and all I get is his voice mail," Buzzanelli said, his eyes tearing up.

The accident happened during heavy rains, and critics have said for years that such an accident was possible at the airport because its runway is too short for large planes landing in rainy weather.

In 1996, a Tam airlines Fokker-100 skidded off the runway at Congonhas airport and down a street before erupting in a fireball. The crash killed all 96 people on board and three on the ground.

A federal court in February of this year briefly banned takeoffs and landings of three types of large jets at the airport because of safety concerns at Congonhas airport, which handles huge volumes of flights for the massive domestic Brazilian air travel market.

But an appeals court overruled the ban, saying it was too harsh because it would have severe economic ramifications, and that there were not enough safety concerns to prevent the planes from landing and taking off the airport.

On Monday, two smaller planes slipped off the airport's runway in rainy weather, but no one was injured.

But rain and the length of the runway shouldn't be immediately blamed for the crash, said William Voss, president and CEO of the Flight Safety Foundation in Alexandria, Virginia.

He said the A320s were not covered under the judge's ban, and that the Tam jet was a relatively recent model.

"So there are no red flags coming up, it sounds like a straightforward runway overrun," Voss said.