Iraq's FM: U.S. withdrawal could lead to civil war and collapse of state 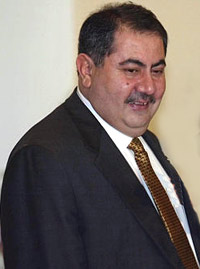 Iraq's FM: U.S. withdrawal could lead to civil war and collapse of state

Quick troop withdrawal could lead to civil war and the collapse of the Iraqi state, Iraq’s foreign minister said and added that that the U.S. has a responsibility to build Iraqi forces so that they take over.

Hoshyar Zebari told reporters that the Iraqis "understand the huge pressure that will increase more and more in the United States" head of a September report to Congress by U.S. Ambassador Ryan Crocker and military commander Gen. David Petraeus.

The report will assess progress toward national reconciliation. Leading Republicans say if there is no sign of progress they will demand a change in Iraq policy.

"We have held discussion with members of Congress and explained to them the dangers of a quick pullout and leaving a security vacuum," Zebari, a Kurd, told reporters. "The dangers could be a civil war, dividing the country, regional wars and the collapse of the state."

"In our estimation, until Iraqi forces are ready, there is a responsibility on the United States which is to stand with the (government) as the forces are being built," he said.