Two men arrested under the Terrorism Act in northwestern England 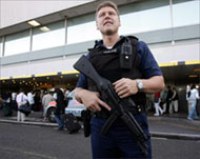 Two men arrested under the Terrorism Act in northwestern England

Police in England arrested two men under the Terrorism Act, but it was unclear whether they were suspects in the recent incidents.

The men were arrested at noon in an industrial park in Blackburn, 220 miles (350 kilometers) northwest of London, Lancashire Police said.

"They have been taken to a secure police station in Lancashire. At this time it is too early to confirm whether or not these arrests are linked to recent events in London and Glasgow," a police statement said.