Police made a fifth arrest in connection with a fiery attack on Glasgow International Airport and a foiled car bomb plot in London. 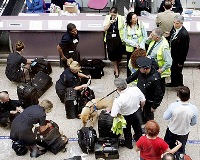 Britons must realize the terrorist threat the country faces is "long-term and sustained," Prime Minister Gordon Brown said in a nationally televised interview, adding that it is "clear that we are dealing, in general terms, with people who are associated with al-Qaida."

After meeting with the country's top intelligence officers, police and senior officials, Home Secretary Jacqui Smith vowed the country would not be cowed by the attacks.

"We won't, as the British people, be intimidated or let anyone stop us getting on with our lives," Smith said, urging the public to remain vigilant and to report suspicious events to the police.

On Friday, police thwarted an apparent plot to set off a coordinated bomb attack in central London when an ambulance crew spotted smoke coming from a Mercedes that was found to be rigged with explosives. They found a second Mercedes filled with explosives hours later.

And on Saturday, two men rammed a flaming Jeep into the main entrance of Glasgow airport, shattering the glass doors and sparking a raging fire just feet (meters) from people lined up at check-in counters on the first day of summer vacation for Glaswegian schoolchildren.

"Al-Qaida has imported the tactics of Baghdad and Bali to the streets of the UK," said Lord Stevens, Brown's terrorism adviser, referring to the 2002 and 2005 attacks on the Indonesian resort island that killed more than 200 people and the daily car-bombings in the Iraqi capital.

The two men from the Glasgow attack were in police custody Sunday, one of them under guard in the hospital after being engulfed in flames when the Jeep crashed into the airport.

Early Sunday, police arrested two people a 26-year-old man and a 27-year-old woman on a major highway in Cheshire, northern England, in a joint swoop by officers from London and Birmingham, Scotland Yard said in London. A fifth suspect was arrested in Liverpool, police there said.

Police said officers were searching a residential area about 7 miles (12 kilometers) west of central Glasgow an area about a mile (1.6 kilometers) from the airport. In Houston, a small town just outside Glasgow, police cordoned off the area around a two-story house to search it.

"We can confirm as part of the ongoing inquiry into the incidents in Glasgow airport and London, a number of houses in the Renfrewshire area are being searched," police said in a statement.

Britain raised its security alert level to "critical" the highest possible level, indicating terror attacks may be imminent as the attacks raised fears that the type of car bomb attacks now commonplace in Iraq has now reached European shores.

The new terror threat presents Brown with an enormous challenge early in his premiership at a time of already heightened vigilance one week before the anniversary of the July 7, 2005, London transit attacks. Those were largely carried out bylocal Muslims, exacerbating ethnic tensions in Britain.

Brown, a Scot who replaced Tony Blair as prime minister just days earlier, urged Britons to remain "constantly vigilant" about security. He said "Everything is being done in our power ... to protect people's lives."

"We will not yield, we will not be intimidated, and we will not allow anyone to undermine our British way of life," he told the British Broadcasting Corp. in a TV interview.

"This weekend's bomb attacks signal a major escalation in the war being waged on us by Islamic terrorists," he wrote in a column in Sunday's News of the World newspaper.

He said the terrorists are using "the same technology, the same bomb-making techniques, the same operating methods as their brothers-in-arms in both Baghdad and Bali," the Indonesian resort town targeted several years ago.

Glasgow police chief Willie Rae said a suspicious device was found on a man wrestled to the ground by officers at Glasgow airport and hospitalized in critical condition with severe burns.

Witness John Smeaton said the man shouted "Allah, Allah" as he was detained.

"There are clearly similarities and we can confirm that this is being treated as a terrorist incident," Rae said.

British media said the man was wearing a suicide belt and that police had found propane gas cylinders in the vehicle in Glasgow. But police later said an initial inspection by explosives experts had not found a suicide vest. Rae made no mention of gas cylinders.

Glasgow airport began reopening Sunday, although the airport operator warned a "large number" of flights would be canceled. Cars were not allowed to drive up to the terminal building.

The crashed jeep remained out front, covered in a blue tarpaulin, and at one point, the line of people waiting to pass through the security cordon stretched for several hundred meters (yards).

Officers also were reviewing closed-circuit television footage in the search for clues into the foiled bombings. Detectives said they were keeping an open mind about who the bombers were, but terrorism experts said the signs pointed to a cell linked to or inspired by al-Qaida.

Police did not say whether the SUV that struck Glasgow airport was carrying explosives, but one witness reported seeing a gas canister in the vehicle.

The incident hinted of a foiled December 1999 plot to attack Los Angeles International Airport. Customs agents stopped a man in a car packed with 124 pounds (56 kilograms) of explosives. He is serving a 22-year prison sentence for the plot.

And last year, a 35-year-old British convert to Islam was convicted of plotting to bomb several U.S. financial targets and luxury London hotels with a plot that called for using limousines packed with gas tanks, napalm and nails.

In April, accused members of an al-Qaida-linked terror cell were convicted of conspiring to blow up the Ministry of Sound nightclub, one of London's biggest music venues.