Four men, including three members of Saudi Arabia's religious police, went on unprecedented trial for their alleged involvement in the death of a man in detention. 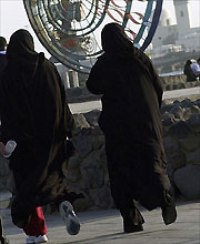 The man's family is demanding the death penalty for those found guilty of the death their relative, Ahmed al-Bulaiwi, a retired border patrol guard in his early 50s. Al-Bulaiwi died in custody shortly after his June 1 arrest for being alone with a woman who was not a relative an act considered an offense in the kingdom.

Audah al-Bulaiwi, who is representing the family in court, said three judges presided over the first hearing in the case in the northern city of Tabuk. He said the defendants three members of the religious police and a fourth believed to be from the regular police were present in the courtroom.

"We are demanding execution for those found guilty," he said.

A new hearing has been set for Tuesday, said Audah al-Bulaiwi. The trial was supposed to begin on June 23, but a judge postponed it to Sunday because the documents the al-Bulaiwi family had presented were incomplete.

Al-Bulaiwi's death and the case of a second man who died in custody are a setback for the Commission for the Propagation of Virtue and the Prevention of Vice, which employs the religious police. The cases have provoked a wave of condemnation and calls for the regulation of this independent body.

In the al-Bulaiwi case, commission members arrested the man after they observed the woman, believed to be in her 50s, getting into his car near an amusement park, according to accounts published by the local media. Under the kingdom's rules, a woman cannot drive, and can only go out in public with her father, brother, son or husband.

An investigation showed that al-Bulaiwi, who supplemented his pension by working as a driver, was asked by the family of the woman to drive her home, according to press reports.

An official medical report cleared the commission members, saying al-Bulaiwi died of natural causes. The defendants are being tried under the private rights of crime victims or their dependents.

Another commission member has been arrested in the case of Sulaiman al-Huraisi, 28, who died last month while in custody of the religious police. The force had raided his house in Riyadh because they suspected he had alcohol illegal in Saudi Arabia. It was not clear whether he would stand trial.

Maher al-Hazimi, legal consultant for the al-Huraisi family, told Al-Watan newspaper that the cause of al-Huraisi's death was "severe" beating that fractured his skull and detached his right eye.

He said tests did not show any kind of drugs in al-Huraisi's system, according to the paper.

In a third case, a Saudi woman has filed a lawsuit against the commission, claiming she was mistreated by two commission members in 2003 because she was not dressed conservatively. A hearing is set for Monday.

Many Saudis say they support the idea of having the commission because its mandate is based on several verses in the Quran. But they also say it should be regulated because the free rein it has long enjoyed has led to some of its members overstepping their duties.