Brazos River in North Texas can rise above flood level

on Thursday, prompting Parker County to order a mandatory evacuation of 2,Texas officials expected the Brazos River to rise above flood level, a cause of concern for residents who evacuated once already last week. 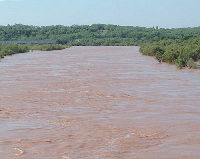 Brazos River in North Texas can rise above flood level

The Brazos was expected to swell to around 26 feet (8 meters) a foot (30 centimeters) above flood stage after officials opened a fourth flood gate at a nearby lake.

The river peaked above 27 feet (8.2 meters) on Thursday, prompting Parker County to order a mandatory evacuation of 2,000 people.

"The next crest doesn't appear that it's going to be as bad as the first one," Parker County spokesman Joel Kertok said. "We just need to keep an eye on it."

Storms on the southern Plains have claimed 11 lives in Texas since more than a week ago. Forecasters expected rain to continue dumping on already drenched parts of North Texas up through Missouri as part of a lingering storm system.

On Saturday, there were reports of tornadoes touching down in southwest Missouri. No injuries were reported and officials were awaiting damage reports.

The rain-swollen rivers in western Missouri were expected to continue to rise into next week, emergency officials said.

In southeastern Kansas, three days of rain led to voluntary evacuations in Iola.

"Various sections in the south of town are under water, and the water is climbing," said assistant city administrator Corey Schinstock. "We have had over 15 inches (38 centimeters) of rain the last three days. ...All the creeks are flooding."

East of Iola, emergency workers used ropes and a harness to rescue two teenagers trapped on top of a pickup truck. They were trapped for about two hours after the truck became wedged against a tree at a low-water crossing in Crawford State Park, the Crawford County sheriff's department said.

Lt. Chuck Yokley of the Kansas Highway Patrol said some homes and businesses in Neodesha, Kansas, were damaged from flooding and that residents were being told to boil their drinking water.

"Neodesha has limited power, and their water supply is contaminated," Yokley said.

Kansas Gov. Kathleen Sebelius declared a state of disaster emergency in 12 counties. The heaviest rainfall in the state was reported in Anderson County, where 18 to 20 inches (46 to 51 centimeters) has fallen over a 60-hour period.

About 100 people near Marble Falls in central Texas remained stranded for a fourth day. Flood and water damage made roads impassable, said Christa Bromley, a Burnet County Emergency Management spokeswoman. The residents had been notified of the evacuation but chose to stay in their homes near Hamilton Creek.

Authorities said all were safe, and they had power and drinkable water.

Authorities were still searching for two 20-year-old men whose sport utility vehicle was found submerged in a creek Thursday in Burnet County.

Highways across wide areas of Oklahoma remained closed Saturday because of flood damage to roads and bridges.