Fire breaks out in transformer at Kruemmel nuclear plant near Hamburg

Fire broke out in a transformer at a nuclear plant near Hamburg, but was brought under control with no injuries and no damage to the reactor itself. 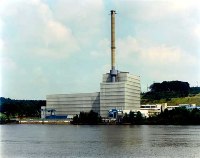 Fire breaks out in transformer at Kruemmel nuclear plant near Hamburg

The fire in a transformer building at the Kruemmel nuclear plant broke out just after 3 p.m. (1300 GMT) and was out by 5 p.m. (1500 GMT), according to the fire department.

It was in an outer area of the plant and had no effect on the reactor, but the entire plant was taken off-line as a precaution, officials said.

"Nobody was injured, and there is no danger for the environment," said Oliver Breuer, a spokesman for the health ministry for the state of Schleswig-Holstein, where the plant is located.

The cause of the fire is under investigation.

The Kruemmel reactor came online in 1983 and supplies about 30 percent of the region's power, according to Vattenfall Europe AG, which jointly owns the plant with E.ON AG.

Also Thursday, Vattenfall's Brunsbuettel plant was taken off-line due to a problem at the facility's non-nuclear part, the company said

In a statement, Vattenfall said no radioactivity had leaked in either of the plants and that both reactors were stable.

Germany plans to phase out all of its 17 nuclear power plants between by 2021.