A former school security guard accused of hiding a teenage runaway in his home for a decade and having sex with her pleaded guilty. 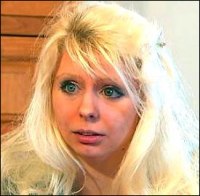 Thomas John Hose, 49, took in the 14-year-old girl and kept her from leaving the tiny home he shared with his parents and son, prosecutors said. Tanya Nicole Kach, now 25, has said the two regularly had sex during her captivity.

The Associated Press normally does not name victims of suspected sex crimes, but Kach has spoken with reporters about her experience.

Hose had been a security guard at Kach's school, and Kach went to live with him in February 1996. She has said she had a crush on him.

Hose's trial was scheduled to begin Tuesday, but instead he pleaded guilty to statutory sexual assault, three counts of involuntary deviate sexual intercourse, two counts of indecent assault and one count each of endangering the welfare of children, corruption of a minor, interference with custody of children and aggravated indecent assault. He was not charged with kidnapping.

Hose was sentenced to five to 15 years in prison.