A passenger plane that disappeared in southern Cambodia likely crashed during a storm, and there is little hope of finding survivors among the 22 people who were on board, Prime Minister Hun Sen said Tuesday. 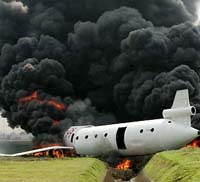 He said he asked for the United States to use its high-tech surveillance satellites to help search for the downed plane, believed to have crashed in a mountainous jungle area.

Some 1,000 soldiers and police were combing rough terrain in Kampot province for the PMT Air plane, a Russian-made An-24 that was flying between two of the country's most popular tourist destinations when it disappeared Monday.

Hun Sen said the plane was flying in a heavy rainstorm and that there was a "high probability it may have crashed into a mountain as it was descending to land" in Sihanoukville, the plane's scheduled destination.

He said he asked U.S. Ambassador Joseph Mussomeli on Monday for the U.S. government "to redirect its satellites to help search" for the plane.

Jeff Daigle, the U.S. Embassy spokesman, said the United States is acting on the Cambodian government's request for "satellite imagery to assist in the search for the missing plane."

"But current weather conditions in the search area are hampering our efforts," Daigle said in an e-mail.

"Although we have very little hope for any survivors, we must continue searching ... to retrieve bodies," Hun Sen said, expressing his condolences to the families of the victims.

The plane disappeared in a mountainous jungle area Monday morning as it was flying from Siem Reap - Cambodia's main tourist hub where the famous Angkor Wat temple complex is located - to Sihanoukville, on the coast.

Him Sarun, head of the Secretariat of Civil Aviation, said Monday that the aircraft is thought to have crashed between Kamchay and the Bokor mountains in Kampot province.

"If we located the plane three or four hours after the crash, there might have been some hope of survivors ... but since it is going to be a whole night passing without finding it, even if there had been any survivors, they could die from loss of blood," he said.

An official at Siem Reap airport said 13 of the passengers were from South Korea - a figure confirmed by officials in Seoul - and three were Czech. The official, who asked not to be named because he was not authorized to speak to the press, said the plane carried a crew of five Cambodians and a Russian co-pilot.

On Tuesday, Khov Khun Huor, Kampot province's deputy governor, said the rescuers have split into two groups in looking for the aircraft. One group was searching near Kamchay Mountain, while a second team focused on the area between Kampot and Sihanoukville, where an explosion was also reportedly heard Monday.

Thach Khorn, the province's governor, said the government will give a US$5,000 (Ђ3,700) reward to any villager who can lead rescuers to the crash site.

Heavy rains have made the terrain treacherously slippery, and some trails are so water-logged that the search teams have had to abandon their vehicles to search on foot.

Fog and rain are preventing helicopters from helping in the search.

PMT Air is a small Cambodia airline that began flights from Siem Reap to Sihanoukville in January, a new domestic route launched by the government to spur the country's burgeoning tourism industry.

Sar Sareth, the airline's director, said his company acquired the missing plane about two years ago from the now-defunct Royal Phnom Penh Airways, a company set up by Prince Norodom Chakrapong, a son of retired King Norodom Sihanouk.

Sar Sareth said he did not know what year the plane was built but that it was in "good condition" before taking off from Siem Reap on Monday.

"It was always in compliance with flight technical and safety procedures. But we cannot say anything yet (about the cause) because information is on the flight recorder," he said, referring to the on-board data recorder commonly known as a black box.