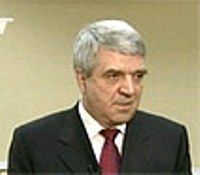 Prosecutor General Peter Miklashevich also told reporters that the arrests were connected with the arrest last month of Alexander Borovsky, a top executive with state-owned petrochemical company Belneftekhim. He said Borovsky had been charged with embezzlement, abuse of authority and spreading state secrets.

He refused to identify the officers of the Belarussian KGB or the Interior Ministry or say how much they had allegedly received, but he indicated the arrests were connected to the ongoing probe into Belneftekhim.

"This is connected with the supply of petroleum products, damages which, of course total in the millions of dollars," Miklashevich said.

Belneftekhim and its subsidiaries account for 35 percent of Belarus' industrial production and over half its exports.

Many of the country's oil refineries have suffered financially under a new duty Russia introduced in January on oil exported to Belarus; Moscow levied the duty while accusing Minsk of unfairly garnering billions in revenues by refining cheap Russian oil and selling higher-value products to Europe.

Lukashenko has sought to maintain a largely centrally planned, Soviet-style economy. He recently ordered the creation of a Belarusian Oil Company, which would control the oil industry, an apparent attempt to do away with middlemen companies that buy oil for use and refining in Belarus.

Some observers have said the damages inflicted by the increased Russian tariffs could threaten Lukashenko and his authoritarian government.

"This latest wave in the fight against corruption ought to attract the attention of Belarusian citizens on the worsening situation in the economy," independent analyst Yaroslav Romachuk said.

Lukashenko has ruled Belarus since 1994, quashing dissent, closing down opposition media and cracking down on private business. The United States and the European Union have imposed sanctions on him and on top members of his government.