A new video recording seen Monday shows kidnapped British journalist Alan Johnston wearing what appears to be suicide bomber's explosives belt and warning it will be detonated if an attempt is made to free him by force. 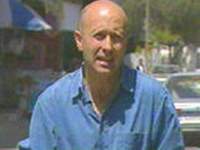 The tape, called "Alan's Appeal," was posted on a Web site used by militant groups to post their messages. The video was made by the Army of Islam, the shadowy group that claimed responsibility for snatching Johnston, a correspondent with the BBC, from a Gaza City street on March 12.

"Captors tell me that very promising negotiations were ruined when the Hamas movement and the British government decided to press for a military solution to this kidnapping," Johnston says in the 1 minute, 42 second, recording, looking nervous and under stress. "And the situation is now very serious, as you can see."

Johnston is seen wearing a red sweater with a blue and white checked vest strapped around his body - the apparent bomb belt.

Johnston was standing and shaking his head as he spoke. Light entered the room from above, and an Arabic translation was provided on the screen.

"I do appeal to the Hamas movement and the British government not, not to, resort to the tactics of force in an effort to end this," he said, in a jittery tone.

"I'd ask the BBC and anyone in Britain who wishes me well to support me in that appeal," he said. "It seems the answer is to return to negotiations, which I am told are very close to achieving a deal."

Neither the British government nor the BBC have publicly advocated the use of force to free Johnston. A BBC statement released on Monday reiterated calls for his peaceful release.

"We are aware of the video and its contents. It is very distressing for his family and colleagues to see him being threatened in this way," the statement said. "We ask those holding Alan to avoid him being harmed by releasing him immediately."

A spokeswoman for the British Foreign Office condemned the release of the video, saying it only adds to the distress of Johnston's family.

It was not known when video was made. Deposed Palestinian Prime Minister Ismail Haniyeh of Hamas referred to it in a two-hour speech Sunday in Gaza City, denouncing the kidnapping. The captors have previously said they want a Palestinian militant jailed in Britain to be released in exchange for Johnston.

Since Hamas took over the Gaza Strip earlier this month, its leaders have been saying Johnston's release was imminent. Hamas officials have indicated they know where he is, but have not moved in for fear of harming him.

Hamas leader Mahmoud Zahar said the captors, from the heavily armed Doghmush clan, are hesitant to release Johnston, fearing retaliation after he is freed. Although the Army of Islam participated in a Hamas-backed operation to kidnap an Israeli soldier last year, its relations with the militant Muslim group have since soured.

Khaled Abu Hilal, spokesman for the Interior Ministry in Gaza, said Sunday that concern for the life of the journalist was complicating efforts to free him.

The Web site where the video appears is called Falluja of Iraq. It has been used by militant groups in the past.

The only other video recording of Johnston was posted on a different Web site on June 1.

Johnston was the last Western correspondent based in Gaza. Others left because of the security situation and a wave of kidnappings. Johnston's case has generated condemnations from human rights groups, governments and journalists' organizations.